We are finally on the top today. I mean its cooking from the Kashmiri Kitchen, Northern most part of India. Jammu & Kashmir, the much-disputed land in India is known for its extravagant beauty. The snow clad mountains, the soothing lakes and valleys, it is a picturesque landmark. If nature has bestowed tremendous wealth and richness, Kashmiri people are in par with that. They are known for their literature, music, culture and cuisine. Kashmiri cuisine is known for its unique flavour imparted by whole spices especially saffron and gracious use of nuts and dry fruits. Generally, it is reputed for its meat dishes like Rogan Josh, Sheekh Kabab and Dum Aloo and Kashmiri Pulav. Amidst the love for the famous ultimate banquet wazwan, these lake valley folks also have a special place in their heart for bakery items. From bread to cakes to pastries, there is a long line of stalls throughout the valley region, warming the air with their Tandoor. Kashmiri cuisine also is known as "Kashur Kyon" in the native language has a heavy influence from the Central Asian and Persian cuisine. The custom of having these bread for breakfast and dinner was adapted from them. There are so many breads that are similar to Persian ones. In the local language, Tsot is called a bread. A native's day starts and ends with these warm aromatic flavourful baked goodies and needless to say with a cup of "Kawah"- a Kashmiri chai. Out of the many, most sought out are the Katlamas, Sheermal, Baqerkani, Lavas, Tsot and Tsotchovru. These are either had for breakfast tea or had as snack.

While most of the India enjoy it's famous subtly flavoured Darjeeling black tea, Kashmiri's have their special tea. Kashmiri's are fond of their tea. There are two types of tea that are enjoyed in every household. Noon chai or Sheer Chai is a pink colour salted tea. Its speciality is that it is made with green tea, milk, salt and cooking soda. Well, personally that would not be my cuppa but that's what helps them to survive the cold weather. Noon means salt in the native language. Another one is Kawah, a green tea made with milk, saffron and nuts. It is a speciality during weddings and festivals.

There is an interesting custom in the Kashmiri marriages to substantiate that bread are an intrinsic part of their lives. On the first Tuesday or Saturday after the wedding, the bride's parents should send the groom's family along freshly baked bread adorned with nuts and, salt. This tradition locally is called "Roth Kabhar". The belief behind this practice is that the parents can be assured that their daughter will be able to eat something on her way to the groom's house. In olden days, the commute usually took weeks and it is natural for the bride, because of the unfamiliarity and new people, to be shy in front of the in-laws to have a full course meal comfortably. Today's recipe is a slightly sweet bread Sheermal. Source of this recipe : Cook with Faiza. 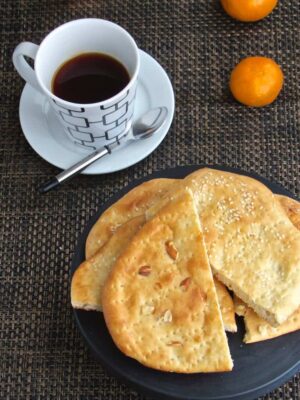 A slightly sweet bread flavoured with Kewra water and topped with sesame seeds.